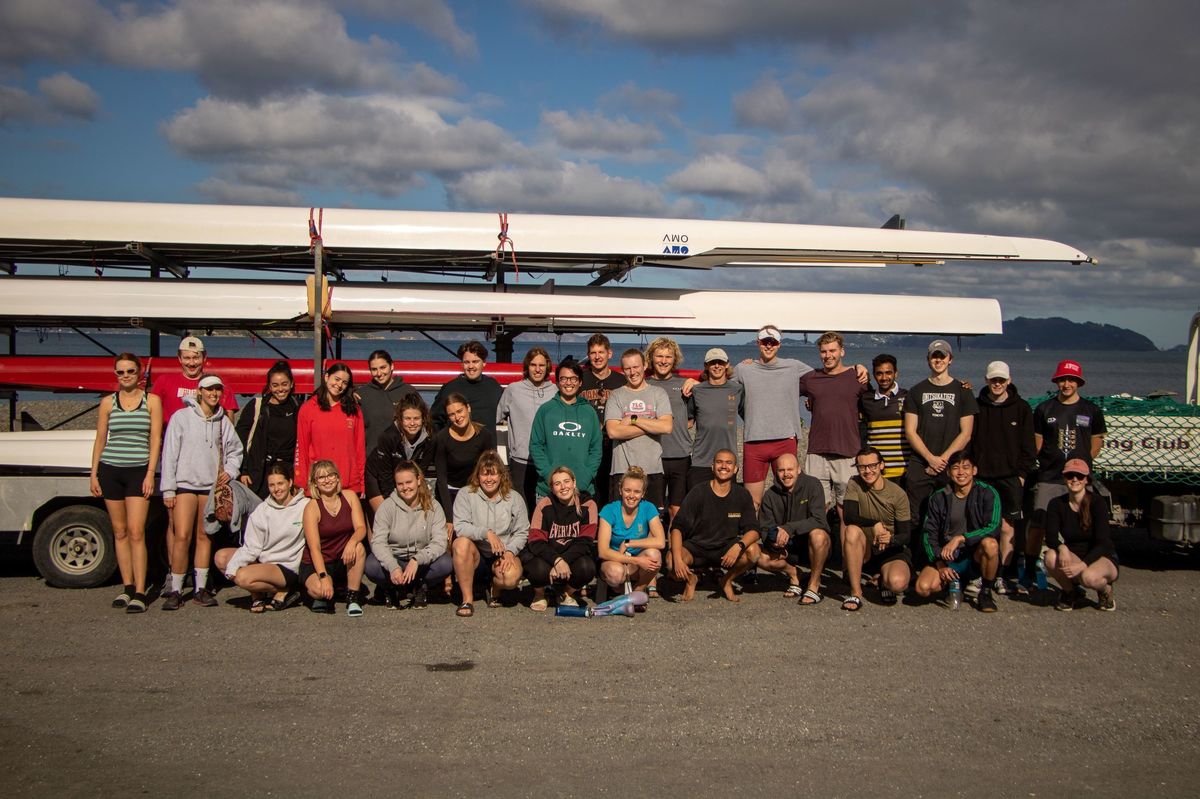 With the Aon NZ University Rowing Championships postponed earlier this year, Victoria University Rowing Club took matters into their own hands and revived the Interfaculty Rowing event that had sat dormant for 5 years. Learn more about the event held on Saturday the 7th of May thanks to this write-up from Club President, Tom Walsh:

After 7 weeks of hard training, covid outbreaks, and early mornings, Victoria University Rowing Club capped off an awesome start to their heavily changed season by hosting it’s first Interfaculty regatta in over 5 years.

Due to the Aon NZ University Rowing Championships being postponed until later in the year, the committee took power into their own hands and worked tirelessly to put together a battle of the faculties across all areas of tertiary study. Our rowers trained hard for 7 weeks in preparation for the race of their lives. When we assembled outside the green shed in Korokoro on that cloudy Saturday morning, the taste of competition was palpable. Whilst no one said it, we all knew that friendships were about to be squandered, and hearts were about to be broken.

The Education Faculty started the day with an immense win in the Women’s 2X, Sylvie Tulloch-Gray and Leah Scholefield made light work of their competition, making a fantastic push at the 200m mark to bring the first points of the day home.

An immediate response was seen from Lewis Aitchinson and Patrick Griffin (Commerce) as the veterans clinched the first two spots in the Men's 1X. With Lewis stomping down at over 40 strokes per minute the entire 500m.

However, the mixed 2X from Emma Butcher and Lochlan Rose was one of the highlights of the day, with a height difference of over 2 feet, they managed to come together through the spirit of their Humanities degree and take the fastest time by under a second to a fantastic challenge from Architecture and Building Science’s Toby Cook and Valarie Chan, who rowed cleanly throughout.

However, none of these races could have prepared us for what was about to come next.

The University of Otago Graduates had been working hard in the background to put together a superteam, in an attempt to assert dominance across the Wellington Region. They managed to pull together rowers from both Massey University and the University of North Carolina to bolster their crew, flagrantly ignoring the rules of mixed racing in the process by recruiting 5 men into their boat. Creating their super squad for the premier event, the mixed 8+.

Our faculties joined forces to eliminate this existential threat; Humanities and Commerce, Science and Education, Law and Architecture. Our dignity both as a club and as a tertiary institution, was laid out on the line. At 10:44am, all four crews lined up along the Petone foreshore. The wind had died in anticipation for this race, the sun peeking out from behind the clouds to watch, and the foreshore full of local dog-walkers who stumbled across the biggest race since Tokyo 2020. Once the bowballs had perfectly aligned, the Chief Umpire sounded the buzzer and all crews ripped it off the start line.

Humanities/Commerce laid down the law from early on. Patrick Griffin presented a masterclass in the art of stroking, winding through at 42 strokes per minute for the first 200m. Otago felt the pressure and responded accordingly via Otago old boy Sam Wilkins winding into the halfway mark. It was bowball to bowball between these two crews, both boats so close you could hear the other ones grunt in every stroke. However, in the last 150m, a fire lit in the belly of the Humanities/Commerce 8+. Emma Keall and Grace Ready, after hearing a thunderous call from Cox Dylan Maynard, sat up and slammed their legs down to get a foothold on Otago, who looked deflated after seeing a canvas taken from them in mere seconds.

Before you could blink, the Humanities/Commerce 8+ took home the gold both for the race and for overall points, as the racing for the day placed a tie on both faculties. A fitting compromise for an elite race.

In the meantime, friendships will need to be repaired as VURC goes on hiatus until closer to September, when we start to prep for the 2022 Aon University Rowing Championships.