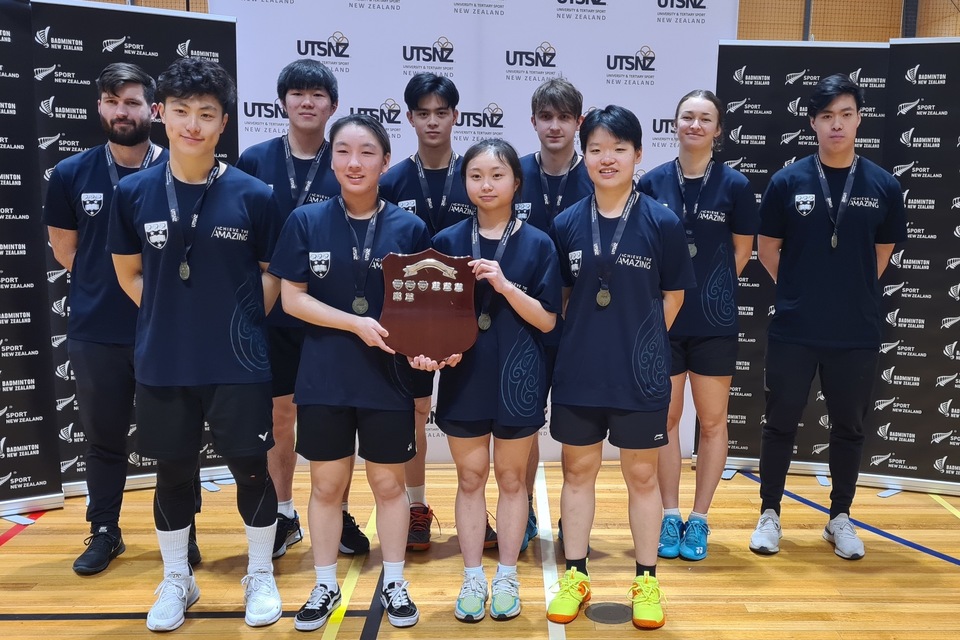 Over 100 students hit the courts for the National Tertiary Badminton Championship and Tertiary Badminton Cup events held at the AUT North Campus over the weekend, taking the tertiary badminton nationals on-campus for the first time ever. In another first, Championship and Challenge Series events were held side-by-side, giving twice as many students the opportunity to represent their universities, compete for a national title, and connect with others from across the country.

Day one didn’t go entirely to script in the Championship with the biggest result of the day coming in round one. The University of Otago took down the higher-ranked University of Auckland 2 team 3-2, all but booking their spot in the semi-finals after the first tie of the tournament. Also in Group A, the University of Canterbury outplayed their eighth seeding and finished third, looking likely to challenge for fifth spot overall.

Group B followed the form guide with the highly anticipated rematch of the 2020 final coming in the last round of the day. This time it was Massey University who came out on top, finishing group play in first place over the University of Auckland’s number one team in second.

In the end it was the undefeated teams who emerged from the semi-finals, with Baddie’s Baddie Team and the Otago Cuppers meeting in a Grand Final that looked likely from the get-go. As they had done all tournament, the team from down south proved far too strong for their opponents, claiming the first ever Tertiary Badminton Cup with a 5-0 whitewash. The bronze medal tie was a much tighter affair, with Just in Time defeating Big Daddy in the deciding fifth and final match.

In was the battle of Auckland in the first semi-final of the Championship as hosts AUT took on their cross-town rivals the University of Auckland. The teams traded wins through the first four matches and it came down to mixed doubles, with Dacmen Vong and Erena Calder-Hawkins proving too strong for the AUT pairing of Adam Jeffrey and Janice Jiang. Massey University booked their spot in the final after four matches against the University of Otago, setting up another rematch of the 2020 Grand Final – this time with a lot more on the line.

In a scary coincidence, results from the first four matches of the Grand Final mirrored those from 2020 as the University of Auckland took the men’s singles and men’s doubles while Massey University prevailed in the women’s singles and women’s doubles. Once again it came down to the mixed doubles with three of the four players returning from 2020, and once again the result went the way of the University of Auckland who were crowned the National Tertiary Champions for the fifth time in the event’s six-year history. Over on court two AUT comfortably earned the bronze medal, finishing with a 5-0 victory over the University of Otago.

A huge thanks goes to the staff at Badminton NZ for their tireless efforts in the lead-up to and during the event, student volunteers Chloe Bardsley, Amy Taylor and Alex Liu who all played pivotal roles, the commentary team who contributed to the excellent coverage on Sky Sport Next, and the helpful staff at the AUT Sport and Fitness centre.

You can see a list of the final placings on our Results page, or a full breakdown of the match results on the Badminton NZ event page. We look forward to building on the event in 2022 – see you there!