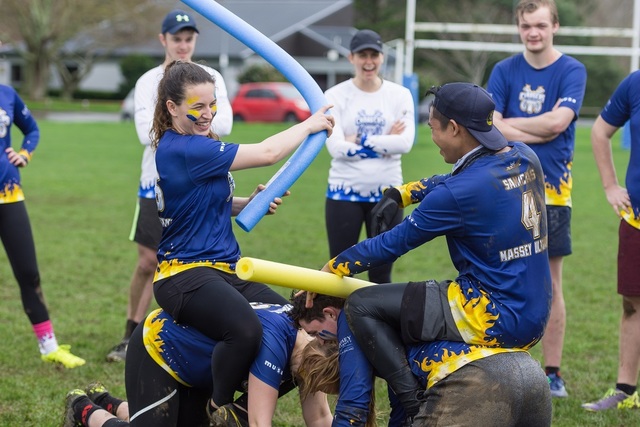 Saturday the 31st of August will see 13 teams from 7 Universities across New Zealand take to the field at Rongomai Park, Auckland for the 2019 National Tertiary Ultimate Championship.

Ultimate is an action-packed sport that sees two teams battling to score points by passing a flying disc or Frisbee to a teammate in the opposing end zone. Being played on both grass and sand, Ultimate has origins as far back as the 1960s. New Zealand Ultimate was established in 2005, but has origins back to the 1980s, and has shown strong and consistent growth since this time.

Among the qualities unique to Ultimate is the ‘spirit of the games’ style, which sees no official referees at games. “Ultimate is self-refereed (by the players) and this places the responsibility for fair play on every player. Highly competitive play is encouraged, but must never sacrifice the mutual respect between players, adherence to the agreed-upon rules of the game, or the basic joy of play” says Iain Stewart, New Zealand Ultimate’s Executive Officer.

“The culture built around the Spirit of the Game lends itself well towards an inclusive environment, and one of the greatest aspects of the sport is that it can be played in mixed-gender format at any level. In fact, the highest competition for the sport – the World Games competition is played exclusively in the mixed division” – Stewart explains.

Tournament Director for this event, Emma Menzies herself is a competitive Ultimate player and in her spare time other than working full time and planning the NTUC, Emma is training for her own Ultimate Worlds Campaign “Juggling free time, training for a world’s campaign and still keeping on top of managing such a big project has required a lot of motivation. I didn’t think I could manage. I think the big thing that got me through was always having support from the AUUC (Auckland University Ultimate Club) executive and having them always willing to pick up odd jobs where I couldn’t.”

Menzies herself has played in the NTUC previously, winning first place at last year’s tournament playing for The University of Auckland in AUUC Flood and says there is a very good range of beginner players as well as highly competitive Ultimate athletes taking the field during NTUCs “There’s quite a large spread of talent at NZTUC, generally holding a large influx of beginners to the sport across all tertiaries. On the other end of the spectrum, you’ll find a good chunk of the U20 and U24 representatives amongst the teams, especially in the main centres - in the finals you’ll find nearly the same level play that you would at the end of New Zealand mixed nationals!”

Iain Stewart believes that there is a very important link between the New Zealand Tertiary Education space and the sport “The Ultimate clubs in universities have grown hugely over the last five years as the development of the national Under 20 programme produces strong young leaders.” And that this is shown by many of the teams competing at the New Zealand Mixed Ultimate Championships being

University club based. Stewart also explains that there is an important recruitment and retention goal for High School leavers moving on to tertiary education “The welcoming culture of Ultimate lends itself well to the retention of school leavers, as they sign up at their tertiary ultimate club and gain an instant group of friends. The stronger players from schools are known through the national Under 20 programme and can be guided towards their university ultimate clubs.”

Ultimate is recognised by the International Olympic Committee, and with a recent memorandum of understanding (MoU) signed between the World Flying Disk Federation (WFDF) and the International University Sport Federations (FISU), there is much on the horizon for Ultimate, so watch this space!

The National Tertiary Ultimate Championship will take place at Rongomai Park, Flatbush, Auckland over the weekend 31st August – 1st of September. New Zealand Ultimate, Auckland University Ultimate Club and University and Tertiary Sport New Zealand welcome anyone that would like to come down to catch the action or find out more about the sport of Ultimate.