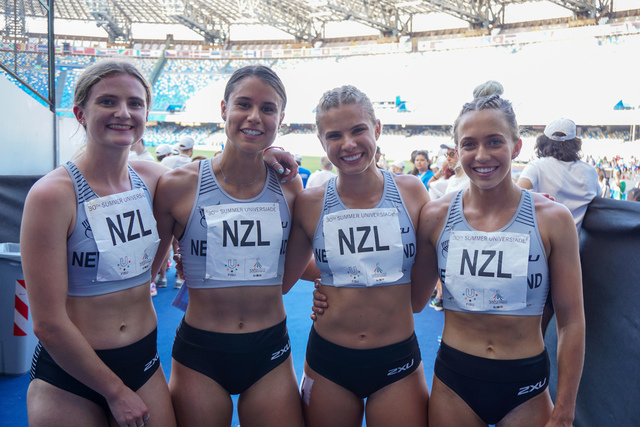 The atmosphere was electric as first timer Eady stormed across the finish line securing a 0.6 second difference between her and fourth place. The spectating New Zealand team were on their seats as the relay team quickly realised they had not only won bronze but had broken the 18-year-old New Zealand 4x100m record by over 0.4 seconds. “It’s pretty unreal. We didn’t know that we could win a medal until we ran the heats yesterday, and that’s when we realised how capable we were” Eaton grinned.

Hobbs, a seasoned international competitor added that their success comes down to “experience. We haven’t done a relay together in a long time. And you need experiences like this to be able to perform at this level.” Eaton acknowledged that “there’s such a depth of sprinting in New Zealand. Hopefully this is just the start of something big! Now that we have performed on the world stage and shown that we can mix it with these bigger countries.”

Sprint coach Elena Brown, “believed in the girls from day one. This was not an overnight success; they have been training for an event like this for several years. This is a world-class competition, the pressure is huge, the experience is amazing, and these girls should be proud of themselves.”

Echoing Brown, Chef de Mission Evelyn Williamson notes that “this result has been in the pipeline for around three years; since they raced together at junior world champs. Athletics NZ have targeted them within the programme and it shows that hard work and focus pay off. People probably don’t normally count New Zealand as relay team threat but tonight our 4 x 100 girls showed that could be changing.”

Eady agrees, commenting that this result “just shows how much New Zealand has to offer and how much further we can go. Next time? Gold.” How do we get there? Brown assures us that “this time we wanted to make solid and safe baton changes instead of perfect changes and that makes a huge difference to the finishing time. It just means that we have so much room to improve and do even bigger, better things.”

The relay team would like to thank the wider New Zealand team, Brooke Somerfield, Brianna Stephenson, Athletics New Zealand, Elena Brown, Scott Newman, Terry Lomax, James Mortimer, UTSNZ and all family friends who have supported along the way. “We’re really lucky we have a talented wider squad here and a back at home. It’s so much more than just the four of us.”

The NZ record set in 2001 was previously held by Brunner, Arnott, Wardell, and Hunt.

The World University Games is a major international sporting event that is held every two years for student athletes from around the world. This year more than 9,000 athletes from 112 countries are estimated to be competing in Naples at the Games, also known as the Summer Universiade.