Gold Medal for New Zealand at the 2019 World University Games 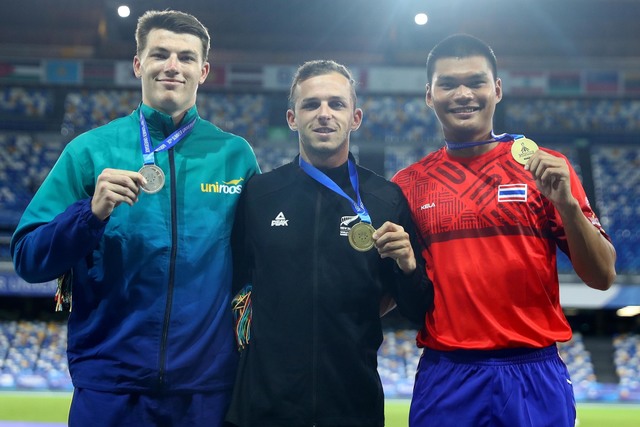 The crowd erupted in San Paolo Stadium, Napoli, Italy as Aaron sprinted to men’s decathlon victory in the 1500m; the last event after two days and 10 disciplines. A third-time World University Games representative, Booth was ready to win gold after claiming bronze in the men’s decathlon at the 2017 Games held in Taipei. It was New Zealand’s only medal at those Games.

A full week before competing, Booth was confident in his training and lead-up, stating that “although it might sound cocky, I’m confident in what I have achieved this year. I’m going for gold.” Setting a new personal best of 7827 points, he finished a massive 234 points ahead of second place, Australia’s Alec Diamond. Going into the 1500m comfortably ahead of the field, Aaron knew he had won when he finished behind teammate Max Attwell. The moment? “It was good. It was cool to think, ‘I’ve actually done this’. 2 years ago in Taipei, the goal was to come back and win this event. Just to know a lot has happened in two years - moving overseas, new coach, new life basically - to be able to still improve and PB at a major event and see what I can achieve is really cool.”

Games Chef de Mission Evelyn Williamson was “stoked and couldn’t be more proud of him for getting gold and a personal best. Aaron has dedicated himself and made a lot of sacrifices over the two years since he won bronze at these games, and his first appearance back in 2015 where he was frustrated with injury. He saw what was possible and had faith that he could be better.  That effort and perseverance has been rewarded tonight.” Not only is Booth a standout athlete, “he has shown leadership within our team and a lot of respect and humility toward his competitors throughout the competition. These are the things we Kiwis look for in a champion.”

Aaron thanked his Mum, Dad, sister Natalie for coming to watch him compete at these games for the third time. Coaches Cliff Rovelto, Matt Dallow, and Jeremy McColl, the athletics team on this trip, and the performance support staff at the University games for helping him achieve his best performance to date.

New Zealand teammate Max Attwell also set a decathlon personal best with 7420 points; setting personal bests in several disciplines along the way. Attwell finished strongly taking out the 1500m and ultimately finishing fourth overall. Booth acknowledged it was “great to compete against another Kiwi” and is “super proud for him.” Williamson has only praise for Attwell, commenting that “this is his first University Games and must open his eyes as to what is possible.  With a PB a like that, there’s nothing more we could have asked of him. Both Aaron & Max have done New Zealand proud.”

The World University Games is a major international sporting event that is held every two years for student athletes from around the world. This year more than 9,000 athletes from 112 countries are estimated to be competing in Naples at the Games, also known as the Summer Universiade.