EVENT PREVIEW: All you need to know about the National Tertiary Ultimate Championship this weekend 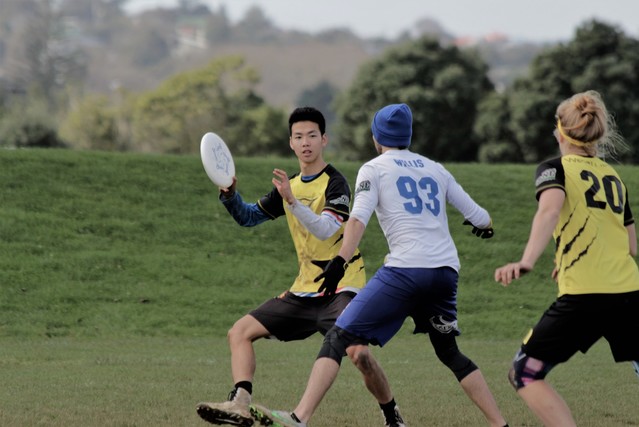 Ultimate is played in more than 80 countries by approximately seven million people. It has a national and world governing body and is recognised by the International Olympic Committee. It is also one of the few sports that enables mixed gender participation at all levels of the game.

This weekend the 2018 National Tertiary Ultimate Championship (NZTUC) will be hosted by Massey University’s Ultimate Club and the Sport and Recreation Centre on behalf of New Zealand Ultimate. It is the first time the event has been held in the Manawatu, and the first year it has been incorporated into the University and Tertiary Sport NZ Shield competition since the event was born out of the ashes of the old Uni Games in 2015.

We spoke with Iain Stewart, New Zealand Ultimate executive officer, about the nuances of the game and why this event is special.

Why is this tertiary championship important for the game of ultimate in NZ?

“This tertiary championship forms a key part of the participation and development pathway for ultimate in New Zealand. A large number of players pick up the game for the first time at university and for many the NZTUC is their first competitive event; the championship generally provides a great experience leading to longer term participation in the sport. This has been working well for us, with 75% growth in the number of teams since its inception in 2015.”

“This growth has been nurtured through university clubs, and performance on the tertiary scene directly leads in to the New Zealand U24 national representative programme. There are a large number of U24 national reps going to be there this weekend. Without a doubt, this event is a key part of the high-performance environment for this age group.”

What makes ultimate so different to other sports?

“Along with the mixed-gender element, there are other aspects that mark the game of ultimate as different to many other sports – teams’ self-referee and are guided by the ‘Spirit of the Game’ ethos. Some teams wear face paint and there are marquees on the side-line – it’s a really great atmosphere to be a part of.”

“We’re delighted to see more tertiary institutions entering the competition for the first time, such as the University of Waikato this year.”

Which players should we look out for this weekend?

“In addition to top players, there are some talented coaches involved too. Ben Waller is a player-coach with the University of Auckland; he was assistant coach to the men's U20 team in Canada. Mike and Mel Connolly (Victoria University of Wellington) are very experienced players having both represented New Zealand at a number of World Championship events.”

What factors can make the difference?

“The teams need to have skill and speed to do well in the sport. In the tournament they need to have depth to last through 5-7 games in a single weekend. Being a mixed sport on the field, teams that best utilise their strong players from both genders will do very well.”

“The gender split is a tactical decision. Each point the team at one end of the field (chosen by the toss at the start of the game) decides on playing 3 men and 4 women, or 4 men and 3 women and the other team then matches that split. Teams with a strength or depth in a gender will therefore choose more points with 4 of that gender on the field.”

“Wet weather doesn't tend to affect the games too much, although the more experienced teams will likely have an advantage in dealing with a wet disc. Wind is more of a factor in Ultimate and can have a levelling affect if both teams struggle to score upwind.”

So, what do you expect from Massey as host?

“It's fantastic to have the tournament hosted in Palmerston North. Although not a major centre of ultimate right now, Palmerston North has had a dedicated playing population for a number of years. The university club has put a lot of work into recruiting and development, highlighting the competitive nature of the sport and the pathways available through ultimate.”

“We contract out the organisation of the event, so this year everything has been arranged by the Massey University Ultimate Club and MU Sport and Recreation Centre. They have been supported by Palmerston North City Council and Sport Manawatu. It's a great opportunity for students to host a national event and it will show the local community what top-level ultimate looks like.”