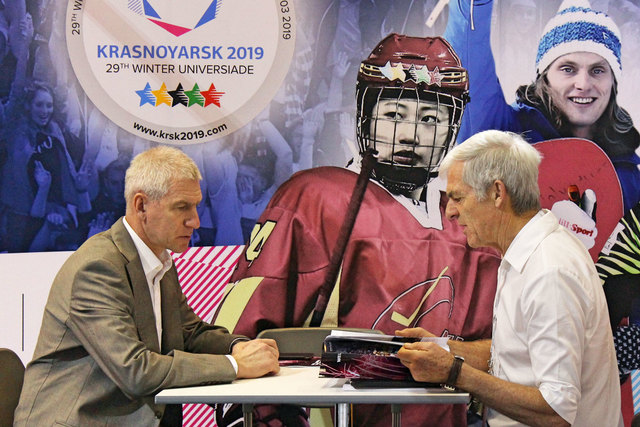 FISU President Oleg Matytsin recently met with the IOC President Thomas Bach to discuss progress against the Memorandum of Understanding signed by the two parties in 2016.

As per the MoU, the 30 April meeting entailed conversations extending beyond the playing field and included discussion on the:

FISU says that the above examples “are delivering on its Memorandum of Understanding commitments; to complement sports with academic attainment opportunities.”

For a fuller review of the discussion visit the FISU story.

Memorandums of understanding were signed between FISU and the IOC in November 2016, and FISU and ANOC in November 2017. ANOC is the international organisation that affiliates the current National Olympic Committees recognised by the Olympic movement. The memorandums pledged to establish closer cooperation between the signees.

Matytsin had a busy month having also played a major role in the SportAccord Convention in Bangkok which gathered 1700 representatives from across the international sports movement to discuss a range of topics including opportunities within the Olympic Movement. During this week in April, Matytsin held court with a number of IOC’s executives including New Zealand representative Barry Maister ONZM (pictured) who is also the Chair of the Olympic Education Commission.

Image: FISU President Oleg Matytsin meeting with IOC New Zealand representative Barry Maister ONZM who is also the Chair of the Olympic Education Commission, at the SportAccord Convention in April.