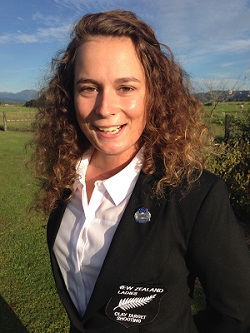 Lincoln University’s Kristy Havill will represent New Zealand at an international volunteering forum taking place in Russia later this year. A third-year Sport and Recreation Management student, Kristy will be the country’s only representative at the International University Sports Federation (FISU) Volunteer Leader’s Academy in Kazan in June.

A successful clay-target shooter and cricketer, Kristy manages to juggle sport competitions alongside her study and involvement with various clubs and committees. Kristy is a team leader and coach for the Forward Foundation which aims to increase participation in girls’ sport, is president of the Lincoln University Recreation Society – a student-run club that encourages work experience opportunities, and is on the Metro Sports Facility Management and Operations Advisory Group.

Kristy has coached and umpired since she was a 14-year-old student at Rangi Ruru Girls’ School, in touch rugby, volleyball, netball and cricket. She plays premier women’s cricket for Lancaster Park and is giving back as an assistant coach of the girls’ team there.

“It’s what other people get out of my volunteering that makes it special. I like to see people for who they are – volunteering allows me to work with new people and help them to set and achieve their goals. If I can help just one person, it’s totally worth it,” she says.

“Sport is my number one passion and I know that without volunteers it simply can’t function. I strongly believe that everybody should be encouraged to volunteer to allow sport to develop. When I encourage others to get involved I draw on my own experience to share the benefits with them. It may not always be obvious straight away, but volunteering can benefit people after they graduate, in work and other areas of their life.”

The Volunteer Leader’s Academy provides professional training for young leaders in the volunteer movement, targeting students around the world that promote sport and event volunteering in their university and region. The Academy provides practical training on topics such as recruiting volunteers, developing leadership skills and organising volunteer programmes. Participants visit sport venues in Russia, hear from senior leaders from major sport and cultural organisations and take part in discussion forums on hot topics.

As the main affiliate to FISU, University and Tertiary Sport New Zealand (UTSNZ) facilitates New Zealand involvement in the Academy.

“We were impressed with the depth and breadth of Kristy’s application. It is obvious that Kristy derives a lot of satisfaction from giving back to sporting communities, and her desire to grow sport covers coaching and mentoring as well as key administration and leadership roles. We are sure her work ethic, eagerness to contribute and ability to create inclusive environments will stand her in good stead at the Academy,” said Sarah Anderson, UTSNZ Executive Director.

Asked how she manages to fit everything in, Kristy has one word: “sacrifice”. As a student-athlete herself, she knows the importance of sleep, managing her time and keeping social distractions to a minimum. This commitment has seen her rise to the top of her chosen sport of clay-target shooting. Kristy won the Ladies National Title at the NZ DTL Nationals last week and will represent New Zealand at the World DTL Championships in Wagga Wagga, Australia from 24-27 March.

The Volunteer Leaders’ Academy is organised by the International University Sports Federation (FISU) and runs from 14-22 June in Kazan, Russia.

UTSNZ has been operating for two years, established by university vice chancellors in late 2015. It replaced the former University Sport New Zealand organisation and is currently made up of nine members, all of which are New Zealand universities but there are plans to grow this base. It is the only national sports body specifically targeted towards the New Zealand tertiary sector.

UTSNZ runs a series of sports events for top New Zealand tertiary teams each year, which started with the 7s women’s rugby success on 4 February in Hamilton and will see Lincoln University defend their men’s and women’s 3x3 basketball title on 8 April in Christchurch. The UTSNZ event calendar also features tournaments in futsal, badminton, table tennis, hockey, volleyball, and netball.